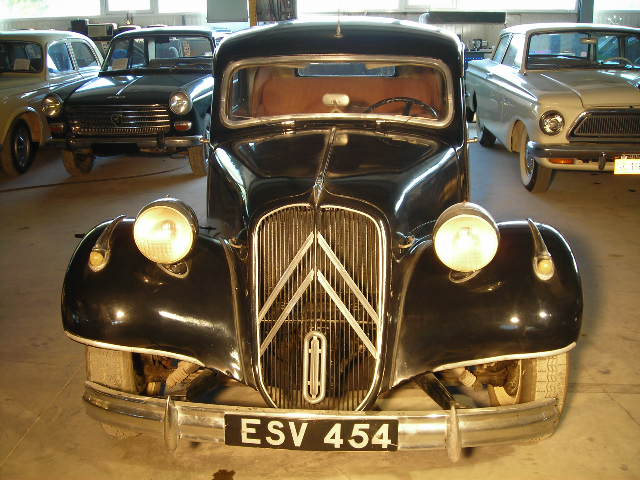 The Citroën Traction Avant is an innovative front wheel drive automobile produced by the Frenchmanufacturer Citroën. About 760,000 units were produced from 1934 to 1957. 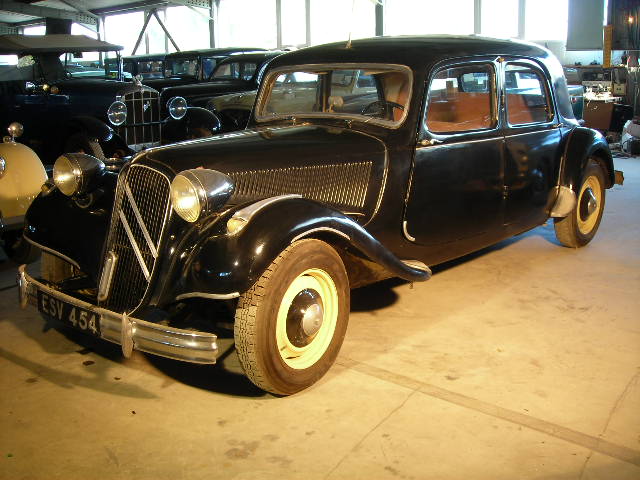 Impact on the world

The Traction Avant, French for “forward traction”, was designed by André Lefèbvre and Flaminio Bertoniin late 1933 / early 1934. While not the first production front wheel drive car – Alvis built the 1928 FWD in the UK , Cord produced the L29 from 1929 to 1932 in the United States and DKW the F1 in 1931 in Germany – it was the most successful.

Not only was the Traction Avant’s drive train innovative, so was its arc-welded monocoque (unitized body). Most other cars of the era were based on a separate frame (chassis) onto which the non-structural body (“coachwork”) was built. Monocoque construction (also called Unit Body or “Unibody” today) results in a lighter vehicle, and is now used for virtually all car construction, although body-on-frame construction is still suitable for larger vehicles such as trucks.

This method of construction was viewed

with great suspicion in many quarters, with doubts about its strength. A type of crash test was developed, taking the form of driving the car off a cliff, to illustrate its great inherent resilience.

The novel design made the car seem very low-slung relative to its contemporaries — the Traction Avant always possessed a unique look, which went from appearing rakish in 1934 to familiar and somewhat old fashioned by 1955.

The suspension was very advanced for the car’s era. The front wheels were independently sprung, using atorsion bar and wishbone suspension arrangement, where most contemporaries used live axle and cart-type leaf spring designs. The rear suspension was a simple steel beam axle and Panhard rod,trailing arms and torsion bars attached to a 3-inch (76 mm) steel tube, which in turn was bolted to the “monocoque”. 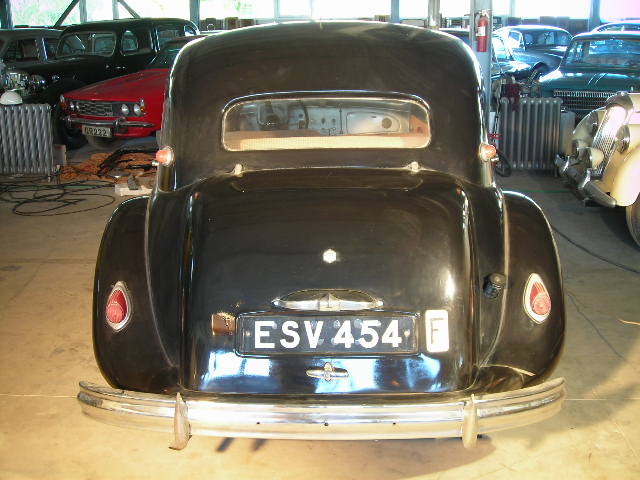 Citroën planned two variants that never entered production, since there was not enough funding available to develop them, except as running prototype vehicles. One was an automatic transmission-equipped model, based on the Sensaud de Lavaud automatic transmission and the other was a 22 CV model with a large V8 engine, of 3.8 litres. The car was supposed to have a less spartan interior than the other Traction Avant’s and it was to feature Citroën’s own new V8 engine. About twenty prototypes were made, but when the project was canceled in 1935 due to Michelin’s takeover, they were probably all destroyed.

In addition to the 4-door body, the car was also produced as a 2-door coupé with a rumble seat, as aconvertible and as an extended length model with three rows of seats. There was even a hatchback-typeCommerciale variant, in 1939, well ahead of its time, in which the tailgate was in two halves, the lower of which carried the spare wheel with the upper opening up to roof level. A one-piece top-hinged tailgate was introduced when the Commerciale resumed production in 1954 after being suspended during World War II. 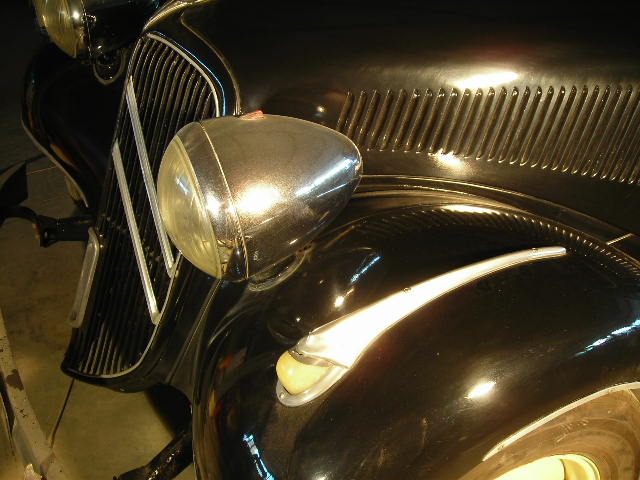 Left-hand drive versions were built in Paris, France and Forest, Belgium, and right-hand drive cars were built in Slough, United Kingdom. The Slough version of the 11L was called the Light Fifteen and the long wheelbase 11 was called the Big Fifteen. This confusing terminology referred to the British fiscal tax rating of the time, which was higher than the French, so the 11CV engine was 15HP in England. The 15CV model was called “Big Six” in reference to its 6 cylinder engine. They were equipped with the leatherseats and wooden dashboards popular in the UK, had a 12-volt electrical system and were distinguished by a different radiator grille and different bumpers (fenders). Some models also had a sliding sunroof.

The Traction Avant used a longitudinal, front wheel drive layout, with the engine set well within the wheelbase, resulting in a very favourable weight distribution, aiding the car’s advanced handlingcharacteristics. The gearbox was placed at the front of the vehicle with the engine behind it and the differential between them, a layout shared with the later Renault 4 and first generation Renault 5 but the opposite way round to many longitudinal front-drive cars, such as the Saab 96 and Renault 18 range and most Audi models. The gear change was set in the dashboard, with the lever protruding through a vertical, H-shaped gate. Because this vertical orientation could have resulted in the car dropping out of gear when the lever was in the upper positions (i.e. second or reverse gears), the gear shift mechanism was locked when the mechanical clutch was engaged and released when the clutch pedal was depressed. The result of this layout, along with pendant pedals, umbrella-type handbrake control and front bench seats, was a very spacious interior, with a flat and unobstructed floor. The low-slung arrangement also eliminated the need for running boards to step into or out of the vehicle. These features made them ideal for use as limousines and taxi cabs, and they were quite popular among drivers and passengers alike.

The development costs of the Traction Avant were very high and Citroën declared bankruptcy in 1934. The largest creditor was Michelin, who then owned Citroën from 1934 until 1976. Under Michelin,Citroën was run as a research laboratory, a test bed for their radial tires and new automotive technologies.

In 1954 Citroën’s experiments with hydropneumatic technology produced its first result, the “15H”—a variant of the 6-cylinder model 15 with a self-leveling, height-adjustable rear suspension, a field trial for the revolutionary DS released the following year.

Directly after the introduction of the Citroën ID, a simplified and more competitively priced version of the still revolutionary DS, production of the Traction Avant ended in July 1957. Over 23 years, 759,111 had been built, including 26,400 assembled in Slough in England, 31,750 assembled in Forest near Brussels and 1,823 assembled at Cologne in Germany. The total reflects the production stoppage during World War II.

As of 2006, the oldest surviving 7A has production number (“coque nr”) AZ 00-18, and is displayed in partly dismantled shape (engine and front wheels detached) in the Citroën Museum in Paris. The oldest running 7A is probably number AZ-00-23, which was, until 1 September 2006, in possession of a Dutch owner and is now with a Slovenian owner.

Traction Avants are fairly robust vehicles. Every few years, Traction Avant enthusiasts ship their vehicles to an exotic location for a rally. In 2002, for example, a group of over 30 Tract drove from Los Angeles to New York without incident.