This is one of my favourite Jaguars, made in 1966, with a powerful 2.4 liter engine and disk brakes all around. While I was driving her across Europe, on the way to Crete, I was listening to a Belgian radio station that was playing

Frank Sinatra non stop, and I was wondering why… I later found out that it was the day he passed away. I would be inclined to say that it is the most successful car made by Daimler/Jaguar ! 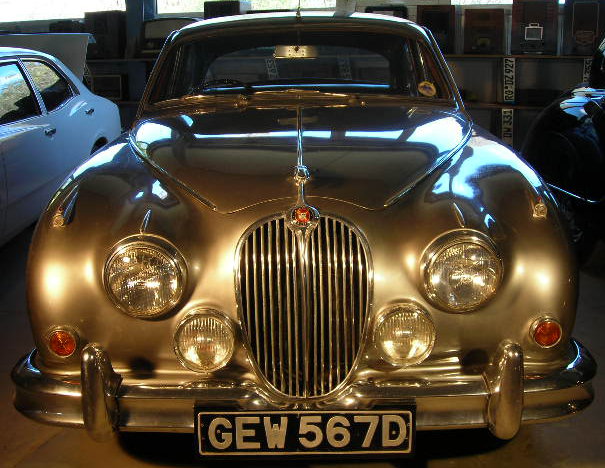 The Jaguar Mark 2 (also known as Mk2, Mk 2 or MkII) is a medium sized saloon car built during the 1950s and 1960s by the Jaguar company in Coventry, England.

The Mark 2 was raced successfully in the European Touring Car Championship, until the Ford Falcon convincingly outperformed it.

The Jaguar Mark 2 was by now nearing the end of its production life.

The Jaguar Mark 2 (also known as Mk2, Mk 2 or MkII) is a medium sized saloon car built during the 1950s and 1960s by the Jaguar company in Coventry, England.

Adhering to William Lyons’ maxim of “grace, pace and space”, the Mark 2 was a beautiful, fast and capable saloon car. It came with either a 120 bhp 2.4 L, 210 bhp 3.4 L or 220 bhp 3.8 L Jaguar XK6 engine. The 3.8 is similar to the unit used in the 3.8 E-Type (XKE), having the same block, crank, connecting rods and pistons but different inlet manifold and carburation (two SUs versus three on the E-Type in Europe) and therefore 30 bhp less. The head of the six cylinder engine in the Mark 2 had curved ports compared to the straight ports of the E-Type configuration. For markets other than the US the 3.4 was fitted with twin SU carburettors and the 2.4 with twin Solexes, but three Solexes were used in US spec 3.4s and 3.8s in order to meet SMOG emissions legislation. This reduced power output over the equivalent SU carburetted examples. 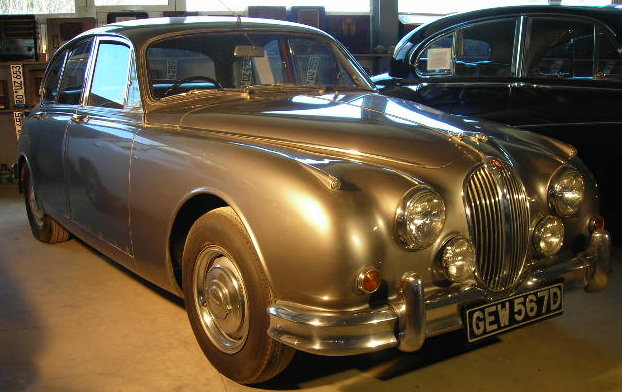 The Daimler 2.5 litre engine was fitted to the Daimler 250 derivative of the Mark 2 (In European markets known as the Daimler 2.5-V8 then Daimler V8-250), having first been used in the Daimler SP250. (Note: The SP250 was originally known as the Daimler Dart but “Dart” was a trademark of Dodge and had to be dropped by Daimler under threat of legal action). The aluminium alloy Daimler engine was lighter than the cast iron block Jaguar sixes, reducing the mass over the front wheels therefore reducing understeer compared to the XK-powered versions under hard cornering.

1966 saw the leather seat covering replaced by ‘high grade synthetic upholstery’, and for the UK market the front fog lamps were replaced by circular vents with the cost option of lamps. The sales price was reduced, to compete with the pricing of the Rover 2000 TC. The Jaguar Mark 2 was by now nearing the end of its production life. 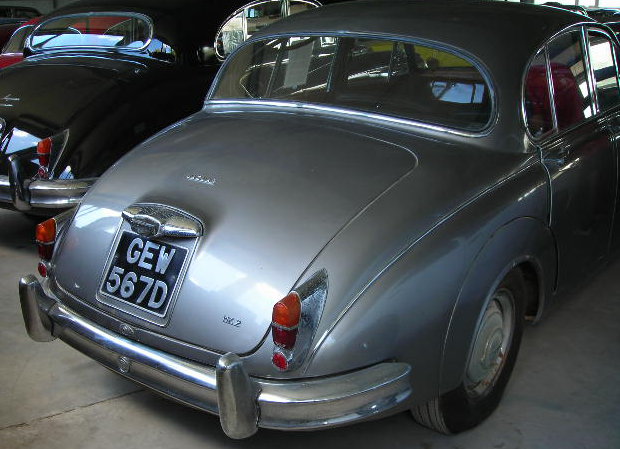 ; changes to the later cars are identified by slimmer front and rear bumpers than the earlier versions. The 240’s performance was increased by upgrading the 2.4’s cylinder head and twin Solex carburettors to the straight port ‘E-Type’ head and twin SU carburettors. This resulted in some resurgence in sales reflected in the production figures for the various versions listed below.