The evolution of the magnetic recorders and Wirek, up to the tape era. 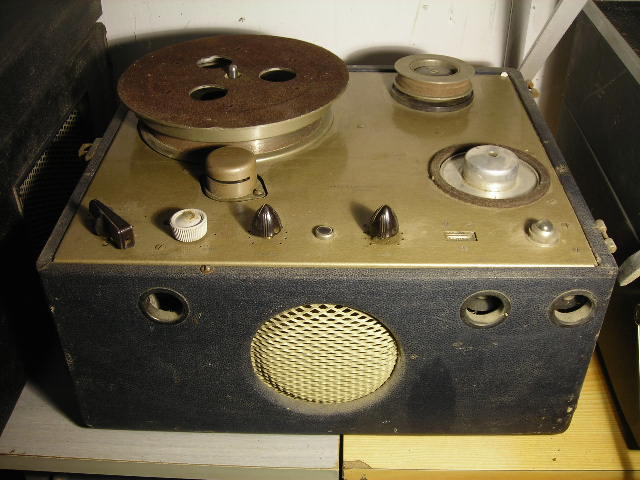 The wire recorder was a short-lived but important form of consumer sound recording device. Technically, it has a history that goes back to the 19th century, but the vast majority of wire recorders ever produced were made in the period from the late 1940s to the early 1950s.

Unfortunately, not much reliable historical information about these machines is out there. It’s a common assumption, for example, that wire recorders “evolved” into tape recorders.

The following pages outline the history of the wire recorder, and trace its rise and rapid decline.

The first practical form of “magnetic” recording (that is, the kind of recording process used with videotape, audio tape, computer hard drives, etc.) came in the form of sound recording on steel wire. Between about 1898 and 1900, Danish inventor Valdemar Poulsen developed and patented the”Telegraphone.”

The Telegraphone (pronounced with the emphasis on the second syllable) was the first device capable of recording sound magnetically, and it did so on a thin steel wire; Poulsen and others called it piano wire, and it was apparently a single strand of commercially available wire made of ordinary steel. His very first machine, intended only to demonstrate the concept, employed a relatively short length of wire, wrapped around a metal cylinder, which was hand-cranked. This avoided the need to design a functional wire-transport system. Within a short time, Poulsen also demonstrated a steel “ribbon” or tape recorder and then a machine to record magnetically on a steel disk. All three types were promoted as alternatives to phonograph-type dictating machines, such as the recently introduced phonograph and graphophone (in the 1880s these were still sold mainly for dictation). Poulsen saw as the chief advantage of the Telegraphone its ability to record directly from the telephone lines, which the phonograph could not do. Such a machine might, for example, provide a sort of remote dictation capability. It was a humble beginning for a technology that would eventually replace its rival, the phonograph, and become amazingly common today.

The Telegraphone generated a lot of excitement and was hailed as a scientific breakthrough (the recording process seemed to contradict contemporary theories of magnets). As a commercial product, the history of the Telegraphone was less than successful. It was manufactured in at least two versions, one by Poulsen’s workers in Denmark, and another by the American Telegraphone Company of Wheeling, West Virginia and later Springfield, Massachusetts.

European Wire Recorders in the 1920s

The Telegraphone was not a commercial success, but it did demonstrate that a wire recorder could be used successfully for certain applications such as office dictation and telephone recording (for a history of the answering machine, click here). Several European companies in the 1920s attempted to market improved wire recorders for dictating and telephone recording purposes. These were the first magnetic recorders to use the new technology of electronics. Using the vacuum-tube electronic amplifiers that became available after World War I, these recorders could capture weak telephone signals and reproduce them with greater volume than was possible with the Telegraphone. Examples of these European machines included the “Textophone” and the “Dailygraph.”

Even though the wire recorder was still in its infancy, the technology that would bring about its obsolescence was already taking shape. AEG, a German electrical manufacturer, and I.G. Farben, a large German chemical firm, teamed in the early 1930s up to design a tape recorder that used a new type of tape. Rather than the solid steel band introduced by Poulsen, engineers developed a new medium consisting of a special iron oxide powder coated onto a plastic tape (there were other variations, such mixing the iron into the liquid plastic and then casting the homogenous mixture into a thin tape). The recorder, called the Magnetophon was initially disappointing in its performance compared to existing magnetic recorders, but with numerous improvements it soon became the standard in all German RRG radio stations. It was discovered during the war by the Allies and after Germany fell in early 1945, many examples are “liberated.”

Wire Recorders in the 1940s

Meanwhile, wire recorders were developed in the period from 1900 to the late 1940s, but they were produced only in very small quantities. The Japanese, for example, were allies of the Germans in World War II, and so apparently had some access to German electronics technology, but also had their own set of talented phycisists and electrical engineers. They designed an updated version of the Telegraphone and apparently used it for military purposes. 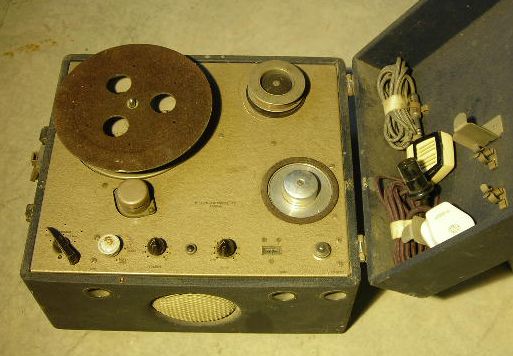 This “Anritsu” is a rare example of a Japanese-made wire recorder of the WWII era.

Just before the US entered World War II, Chicago engineering student Marvin Camras developed an improved telegraphone around 1939. While probably aware of the European wire recorders the magnetophon tape recorder, Camras developed his own ideas about developing simple, inexpensive versions of the machine for consumers, rather than for military, studio, or dictation purposes.

During the war, Armour Research Foundation received a contract from the United States Navy to develop a portable sound recorder. The original recorder was modified make it more rugged. Between 1942 and the end of the war, Armour and a licensed manufacturer, General Electric, have made perhaps a few thousand of these recorders. They were used for many purposes throughout the war, most notably as a portable field recorder for journalists.

A World War II-era Armour wire recorder. Models 50 and 51, which were slightly different in design, were made by Armour as well as by General Electric and Radiotechnic Laboratories.

A second inventor, Semi J. Begun, immigrated to America from Germany in the 1930s, and also began working on magnetic recording. Begun’s experience included the design of a steel tape recorder for the C. Lorenz company, which was put into use in radio stations around Europe. HE was hired by the Brush Development Company of Cleveland, Ohio, a private research laboratory that would be engaged in, among other things, the development of microphones and phonograph cartridges. There he designed a series of wire, tape, and magnetic disc recorders for various purposes including sound recording and (analog) data recording.

The Foundation licensed the manufacture of its recorders to over a dozen American and European manufacturers, and introduced a cheaper “consumer” design which many of the licensees adopted. The resulting income funded additional research that Armour hoped would help the organization remain at the forefront of the industry. Armour standards for wire speed, the wire itself, wire reels, and other basic features are adopted by nearly all manufacturers. Brush recorders were also on the market by 1946, but Brush with few exceptions was unable or unwilling to license its designs. Lawyers for Brush and Armour would eventually work out a cross-licensing agreement between the two, but neither group benefited much from it.

In the late 1940s and early 1950s Armour attracted dozens of licensees, most in the U.S., but also many companies in the UK, France, Germany, Sweden and elsewhere.

The Wire Recorder and Tape Recorder in Competition

By 1946, tape recorders were already well-known in the audio engineering communities in the U.S., the UK, and elsewhere, but few of them were actually in use. Between about 1948 and 1950, high quality studio recorders would enter the scene and begin to displace the disc “transcription” recorder for many applications.

Although the wire recorder was never taken seriously for high quality studio recording, some engineers tried to convince the world otherwise. Several former Armour Research Foundation employees formed the Magnecord Corporation in 1946. Their first product was to the Magnecorder model SD-1 wire recorder, a high fidelity machine intended for the studio. According to one of Magnecord’s founders, SD stood for “super duper.” It was capable of true high fidelity reproduction, although by the time it was demonstrated the shift to tape recorder was underway. While the SD-1 failed, Magnecord became one of the leading manufacturers of tape recorders.

The peak of the wire recorder’s short commercial life came in 1948 and 1949. Many Armour-based wire recorders began to appear on the American market under various brand names, such as Webster-Chicago (or Webcor), Silvertone, Air King, WiRecorder, Crescent, Miles Reproducer, Pentron, Bendix Radio, C. G. Conn, J. P. Seeburg Corp., Sonora Radio, Stromberg-Carlson Wilcox-Gay, Hoffman Radio Corp., RCA, GE, and Electronic Sound Engineering Co. The novelty of the technology and the ability to record sound at home spurred a great deal of interest. Webster-Chicago Corporation also hit upon an important market niche with its line of wire recorder dictation machines. Although they lacked some of the features of products made by Dictaphone or Thomas A. Edison, Inc., they were less than half the price.

A Webster-Chicago Model 80, one of the most common types of American wire recorders

The wire recorder’s image as a technologically advanced gadget was evident in popular culture. Arthur Miller’s play, Death of a Salesman, featured a scene where the protagonist’s boss is so fascinated with the recorder that he can’t concentrate on a conversation. However, the image would soon fade.

The End of the Wire Recorder

Wire recorders never approached the sales of other electronic devices of the day such as televisions and radios, and went into sharp decline after 1954. In the 1954-55 retail “season,” high fidelity equipment became a big seller. While tape recorders (which also suffered from relatively slow sales through the 1950s) became part of the hi-fi phenomenon, wire recorders faded into obscurity. Why did the home wire recorders of the postwar period fail? My theory is that 1) designers of wire recorders aimed at the mass market rather than the professional market, and this led to the perception that wire recording was second-rate, especially compared to tape recording; 2) record companies failed to embrace the new technology, leaving consumers with no pre-recorded wires and hence fewer ways to enjoy the wire recorder; 3) the Armour-designed wire recorders were difficult to use and unreliable. They had the annoying tendency to snarl wires, and the wire was so fine that handling it could be aggravating; and 4)after the LP record appeared in 1948/9 with massive corporate support, it was more difficult to convince consumers that wire recorders would be the next big thing. (END) 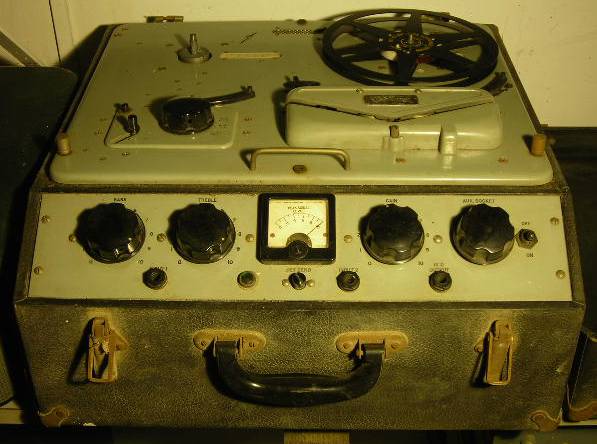