A lovely little car that I would have gladly bought if I was a teenager in the 30s.

In Britain it was also known as the ‘Ford 8’ reflecting its fiscal horsepower rating. Model Y is the American name. 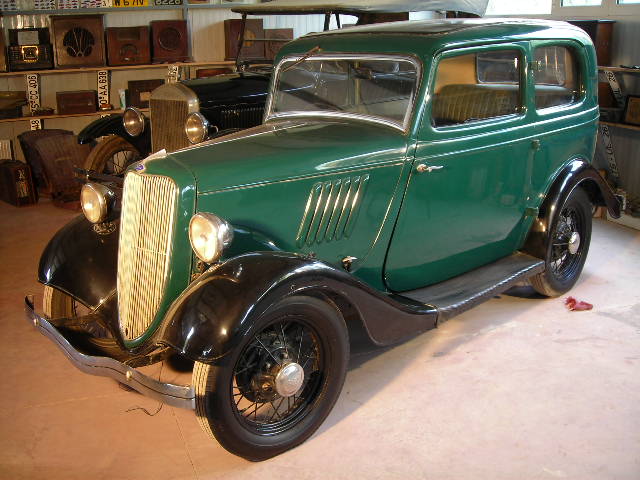 The Model Y was the first Ford specifically designed for markets outside the United States of America. The car was powered by a 933 cc, 8 (RAC)hp Ford Sidevalve engine, and was in production in England from 1932 until September 1937[1], in France (where it was known as the

The little Ford was available in two and four door versions. In June 1935 the two door model was the only fully-equipped car ever to sell in

Although of American Design, the Model ‘Y’ took the British market by storm and when it was first introduced it made a major dent in the sales figures of Austin, Morris, Singer, and Hillman. It went on to thrash them soundly by taking over 50% of the 8(RAC)HP sales. In Britain it was also known as the ‘Ford 8’ reflecting its fiscal horsepower rating.

For the first 14 months the original model with a short radiator grille was produced, this is known as the ‘short rad’. After this in October 1933 the ‘long rad’ Model, with its longer radiator grille and front bumper with the characteristic dip was produced. By gradually improving production efficiency and by simplifying the body design the cost of a Model ‘Y’ was reduced to £100, making it the cheapest true 4 seater saloon ever. Both 4 door (Fordor) and 2 door (Tudor) saloons were produced and these could be had either with a fixed roof, or the slightly more expensive sliding ‘sun’ roof.

The suspension was by the traditional Ford transverse leaf springs front and rear and the engine drove the rear wheels through a three speed gearbox which, right from the start

Ford did not produce an open top car because it was thought that the chassis was too flexible, however several specialist coach builders produced a range of attractive Model ‘Y’ tourers.

The larger and faster 10(RAC)hp Model ‘C’ never sold in such great numbers as the Model ‘Y’ although there was a very attractive factory produced tourer. In 1935 the styling was enhanced with some small modifications and the model was designated the ‘CX’.

A lot of Model Ys have been destroyed in races, because it was fashionable once to make “Hot Rods” out of model Ys. This fact may have increased it’s value drastically, since the remaining model Ys are not as many any more.