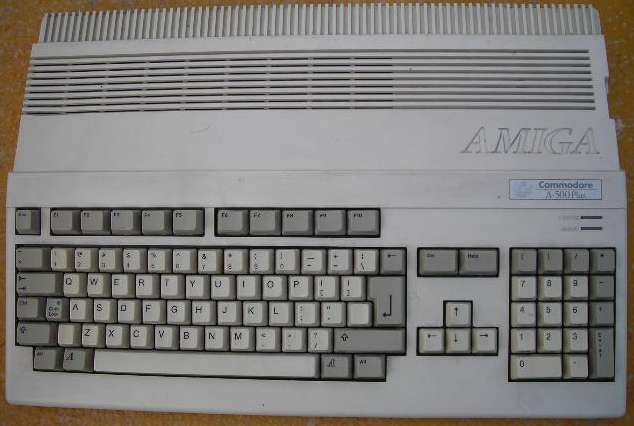 The Commodore Amiga 500 Plus (often A500 Plus or simply A500+) is an enhanced version of the original Amiga 500 computer. It was notable for introducing new versions of Kickstart and Workbench, and for some minor improvements in the custom chips, known as the Enhanced Chip Set (or ECS).

The A500+ was released in several markets (including many European countries), but was never sold officially in the U.S.[2]

Although officially introduced in 1992, some A500 Plus units had already been sold (masquerading as A500 models, and with no prior announcement) during late 1991. It has been speculated that Commodore had already sold out the remaining stocks of A500s, before the run up to the profitable Christmas sales period. In order to make enough A500s before Christmas, Commodore used stocks of the new 8A revision motherboards destined for the A500+. Many users were unaware that they were purchasing anything other than a standard A500. Although the A500+ was an improvement to the A500, it was minor. It was discontinued and replaced by the Amiga 600 in summer 1992, making it the shortest lived Amiga model

Commodore created the A500+ for a couple of reasons. The first was cost reduction; minor changes were made to the motherboard to make it cheaper to produce. It was also so that Commodore could introduce the new version of the Amiga Operating system, 2.04.

Due to the new Kickstart, quite a few popular games (such as SWIV, Treasure Island Dizzy and Lotus Esprit Turbo Challenge) failed to work on the A500+, and some people took them back to dealers demanding an original Kickstart 1.3 A500. This problem was solved by third-parties who produced Kickstart ROM switching boards, that could allow the A500+ to be downgraded to Kickstart 1.2 or 1.3. It also encouraged game developers to use better programming habits, which was important since Commodore already had plans for the introduction of the next-generation A1200 computer. A program, Relokick, was also released (and included with an issue of CU Amiga) which loaded a Kickstart 1.3 ROM image into memory and booted the machine into Kickstart 1.3, allowing incompatible software to run. Full ECS Chipset including new version of the Agnus chip and Denise chip.