An Austin 7 tourer that came from South Africa, an Austin 7 Ruby and an Austin 10 Lichfield from England. The Austin 7s have an engine capacity of 750 c.c. and the 10 1150 c.c. The design is more or less the same. 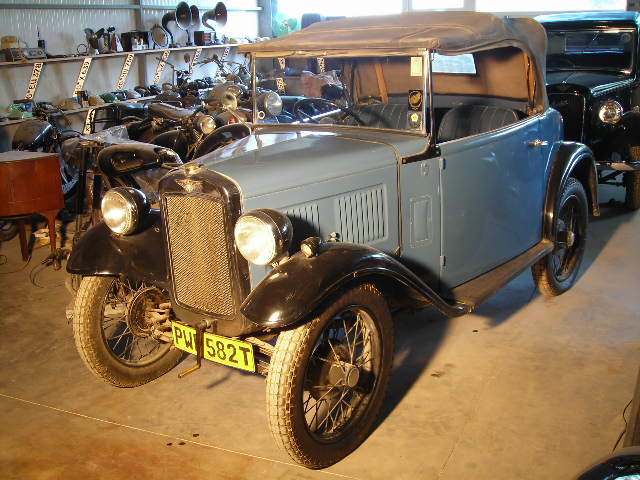 The Austin 7 was a vintage car produced from 1922 through to 1939 in the United Kingdom by the Austin Motor Company. Nicknamed the “Baby Austin”, It was one of the most popular cars ever produced there and wiped out most other British small cars and cyclecars of the early 1920s, its effect on the British market was similar to that of the Model T Ford in the USA. It was also licensed and copied by companies all over the world. The first BMW models (BMW Dixi) were licensed Austin 7s, as were the original American Austins. In France they were made and sold as Rosengarts while in Japan Nissan also used the 7 design as the basis for their original cars, though not under licence.

After World War II, many Austin 7s were rebuilt as “specials” including the first Lotus, the Lotus Mk1 which was based on an Austin 7. 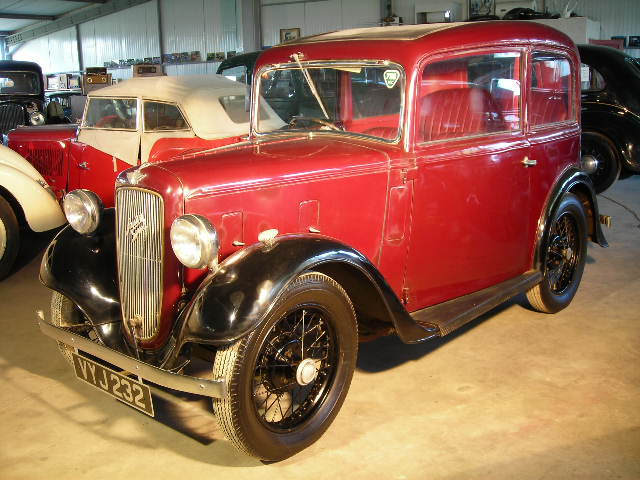 Austin had, before World War I, built mainly large cars but in 1909 they sold a single cylinder 7hp built by Swift of Coventry called the Austin Seven

. After this they returned to bigger cars, but Sir Herbert Austin felt a smaller car would be more popular, in spite of protestations from the company’s board of directors who were concerned about the financial status of the company. Austin won them over by threatening to take the idea to their competitor Wolseley, and got permission to start on his design, in which he was assisted by a young draughtsman called Stanley Edge who worked from 1921 into 1922 at Austin’s home, Lickey Grange. Austin put a large amount of his own money

into the design and patented many of its innovations in his own name. In return for the investment he was paid a royalty of two guineas (£2, 2s), (£2.10) on every car sold.

Nearly 2500 cars were made in the first year of production (1923), not as many as hoped, but within a few years the “big car in miniature” had wiped out the cyclecar industry and transformed the fortunes of the Austin Motor Co. By 1939 when production finally ended, 290,000 cars and vans had been made.

In 2007, during an episode of Top Gear, Jeremy Clarkson and James May studied a number of early car designs (including the Ford Model T and the De Dion-Bouton Model Q and concluded that the Austin Seven was the first mass-market car to be fitted with a ‘conventional’ control layout, as found on modern cars (although the earliest car they found to use this layout was aCadillac).

The Austin 7 was considerably smaller than the Ford Model T. The wheelbase was only 6 ft 3 inches (1.905 m), and the track only 40 inches (1.016 m). Equally it was lighter – less than half the Ford’s weight at 794 pounds (360 kg). The engine required for adequate performance was therefore equally reduced and the 747 cc sidevalve was quite capable with a modest 10 hp output.

The chassis took the form of an “A” with the engine mounted between the channel sections at the narrow front end. The rear suspension was by quarter elliptic springs cantilevered from the rear of the chassis while at the front the beam axle had a centrally mounted half elliptic transverse spring. Early cars did not have any shock absorbers. Brakes were on all wheels but at first the front brakes were operated by the handbrake and the rear by the footbrake, becoming fully coupled in 1930.

Steering is by worm and wheel mechanism.

The four cylinder 747 cc, 56 mm bore by 76 mm stroke, side valve engine was composed of an aluminium crankcase, cast iron cylinder block and cast iron cylinder head. The splash lubricated crankshaft (pressure fed on some sports models) at first ran in two bearings changing to three in 1936. An electric starter was fitted from November 1923 and although the early cars used magneto ignition, this changed to coil in 1928.

The 3 speed and reverse gearbox was built in-unit with the engine and had a variety of ratios depending on application. A four speed gearbox was introduced in 1932 and in 1933synchromesh was added to third and top ratios extending to second gear in 1934.

The back axle was of spiral bevel type with ratios between 4.4:1 and 5.6:1. A short torque tuberuns forward from the differential housing to a bearing and bracket on the rear axle cross member.

Reliant used a derivative of the Austin Seven

engine for their early three-wheelers, before developing an aluminium alloy engine (used as the replacement for the Austin Seven engine by the 750 Motor Club in their Formula 750 motor sport).

With its bright two-tone colour scheme and a style in befitting more expensive cars of the time, together with its low cost (£175), the Swallow proved popular and was followed in 1928 by a saloon version: the Austin Seven Swallow Saloon.

premises in Coventry. It was, in part, the success of the Swallows that laid the foundations of what was to become, by 1945, Jaguar Cars.

Versions of the Austin 7 were made under licence by American Austin from 1930, Dixi (later bought by BMW) in Germany from 1927 and Rosengart in France from 1928. In addition, chassis and running gear were exported to Japan and Australia to have locally made bodies attached. 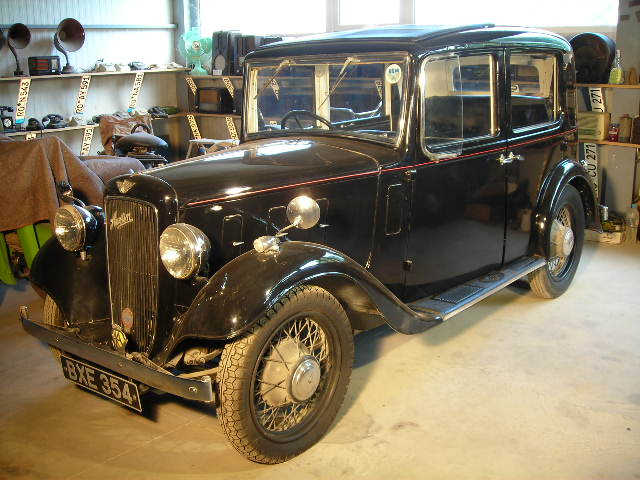 The Austin 10 was a small car made by the Austin Motor Company. It was launched in 1932 and was Austin’s best

selling car in the 1930s and continued in production, with upgrades

The design of the car was conservative with a pressed steel body built on a cross braced chassis. The chassis was bought in and was designed to give a low overall height to the car by dipping down by 2.75 inches (70 mm) between the axles. The 1125-cc four-cylinder side-valve engine producing 21 bhp (16 kW) drove the rear wheels through a four-speed gearbox and open drive shaft to a live rear axle. Suspension was by half-elliptic springs all round and the brakes were cable operated. The electrical system was 6 volt. For the first year only, a four-door saloon was made in two versions. The basic model cost £155 and was capable of reaching 55 mph (89 km/h) with an economy of 34 mpg; it was rapidly followed by the Sunshine or De-Luxe with opening roof and leather upholstery at £168.

The first styling change came in late 1934 with a change to the radiator when the plated surround or cowl was replaced by one painted in body colour and it was given a slight slope. Synchromesh was added to second gear and “semaphore” type indicators were standardised. The saloon was given the name “Lichfield” and got a protruding boot which enclosed the spare wheel.

down each side, with one behind the rear door) “Sherbourne” but the big change came in 1937 with the almost streamlined “Cambridge” saloon and “Conway” cabriolet. Other changes included Girling rod brakes, 16-inch steel disc wheels replaced the 19-inch wires and more room for passengers by moving the engine forwards by 4 inches (100 mm). Top speed rose to 60 mph (97 km/h). These changes did not appear on the open cars, which no longer included the Ripley sports, until 1938 when all cars also gained an aluminium cylinder head on the engine.

A virtually new car was launched in 1939 with the body shell incorporating the floor to give a semi-unitary structure. The car was completely restyled by Argentine born Ricardo “Dick” Burzi who had joined Austin from Lancia in 1929. The bonnet was hinged at the rear, replacing the side-opening type on the old car and the radiator grille became rounded and there was no cabriolet. In spite of the outbreak of World War II, production of the Austin 10 continued

in large numbers but there were no tourers but there was a pick-up. In all during the war 53,000 of the saloons, pick-ups and vans, the last two unofficially known as “Tillies”, were made.

With peace in 1945 a change was immediately made to civilian production but with the post-war financial crisis they were nearly all exported with the first one arriving in the United States in July 1945. The car continued in production in saloon form only until October 1947 to be replaced by the A40. The van also re-appeared post-war with a slightly larger 1237-cc engine.