While I was having a chat with d.j. Martin Turner, the other day, I asked him which was his favourite car, from the past. Without thinking, he answered promptly: “Easy… Austin 1100 3 door in white..”

This page is, therefore, dedicated to him.

The funny thing is that Captain Joe also owned one for a week, before taking it to its last home!

I was so pleased with this car, that I later upgraded

to an Austin 1800, which I bought from a friend of mine for just 80 GBP (pounds) and I kept for many years, going multiple times to Switzerland and doing a tour in Scotland. I did the tour of Scotland, with my parents and aunt Beatrice, and I had the honour of meeting Lord and Lady Cameron, in Edinburgh, who were friends of my aunt Beatrice Miller. On our first appointment we arrived late, and I had to blame the car, by saying that we had an old car that was rather slow… Lady Cameron replied “Don’t worry George, we also have an old car that is slow” 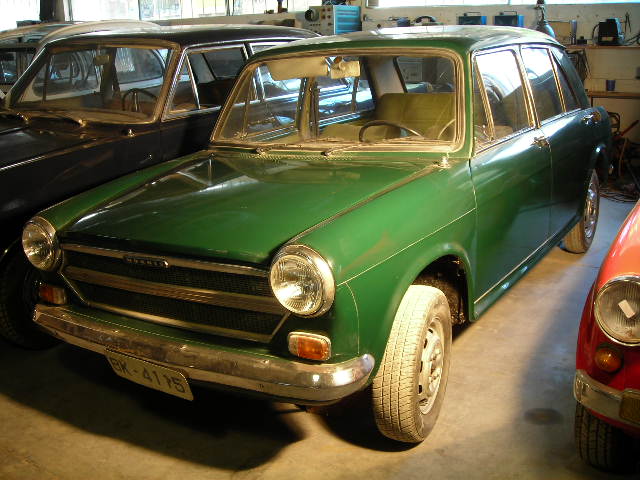 A couple of hours later, we went out to dine with Haggis, and I realised that their slow, old car was a magnificent Rolls Royce of the late 30s ! I don’t think this sweet Lady was exceptionally bright. A couple of days later, she gave me a present of a ‘chinese alarm’ for my house in London, which had been broken into. What she meant by the word chinese, was chain (alarm). Coincidentally, it was made in China !!!

This car, dear Martin, may not be a 3 door Austin 1100 in white, but we can always remove

the 2 rear doors, paint it white and change the make of it!
Thinking about it, it should be easier to do it with the one below: The right colour is already there! 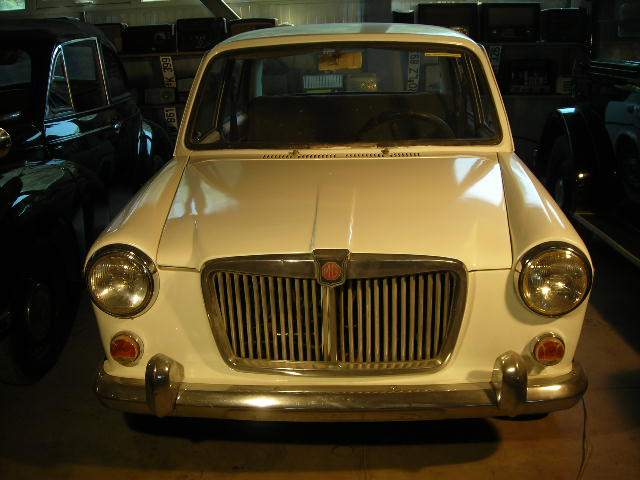 This is a deluxe version of the Austin 1100, made by MG (Morris Garage). According to the owner donor, he paid a much higher price to obtain this one, to what he would have spent for the standard Austin 1100. With this one Martin, we’d only have to reduce the capacity of the engine, remove

2 doors and change the make!

ADO16 is the codename for the development of what became the Morris 1100, a small family car built by the British Motor Corporation (BMC) and, later, British Leyland. Throughout the 1960s, the ADO16 was consistently the UK’s best-selling car. 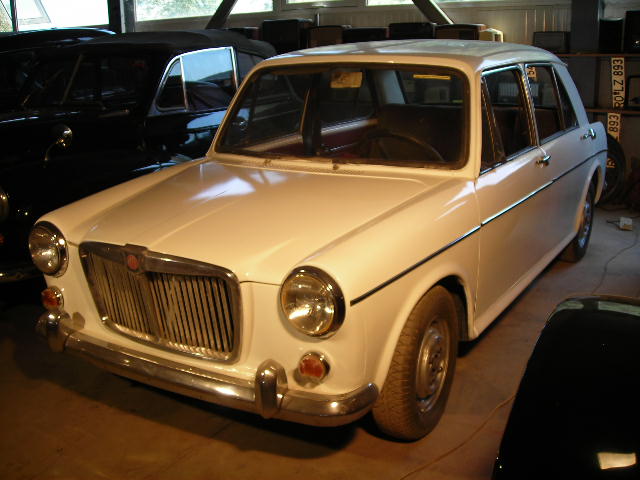 Although most of the cars were manufactured in England, the model was also built in Spain byAuthi, in Italy by Innocenti and at the company’s own plant in Belgium. It was the basis for locally adapted similar cars manufactured in Australia and South Africa.

The estate version followed in 1966, called Countryman in the Austin version and Traveller in the Morris one, continuing the established naming scheme.

Here is another super design by Sir Alec Issigonis, following his tremendous success with the Mini, the Morris Minor and the the Riley 1.5 . It seems that all the bright Greeks go abroad, and we are left with all the crappy & useless ones here, that cultivate corruption, theft and social injustice. The only way to save this country, is to use a hydrogen bomb, to get rid of all these crooks from the parliament, other government departments, the church and the social services . This country is in ruins and it is progressively getting worse. (2010)

The ADO16 (Austin Drawing Office project number 16) was designed by Sir Alec Issigonis. Following his success with the Mini, Issigonis set out to design a larger and more sophisticated car which incorporated even more advanced features and innovations. In common with the Mini, the ADO16 was designed around the BMC A-Series engine, mounted transversely and driving the front wheels. As well as single piston swinging caliper disc brakes at the front, which were not common on mass produced cars in the early 1960s, the suspension system used was theHydrolastic interconnected fluid system designed by Alex Moulton. The mechanically interconnected Citroen 2CV suspension was assessed in the mid-1950s by Alec Issigonis and Alex Moulton (according to an interview by Moulton with CAR magazine in the late 1990s), and was an inspiration in the design of the Hydrolastic suspension system for the Mini and Austin 1100, to try to keep the benefits of the 2CV system (ride comfort, body levelling, keeping the roadwheel under good control and the tyre in contact with the road), but with added roll stiffness that the 2CV was very much lacking. Pininfarina, the Italian styling studio which had worked with BMC before on the Austin A40 Farina, were asked to do the styling. It was a masterpiece of packaging having comparable interior space to the much larger Ford Cortina.

The original Mark I models were distinctive for their use of a Hydrolastic suspension. Marketing material highlighted the spacious cabin when compared to competitor models which in the UK by 1964 included the more conservatively configured Ford Anglia, Vauxhall Viva HA and BMC’s own still popular Morris Minor.

The Mark I Austin / Morris 1100 was available, initially, only as a four door saloon. In March 1966 a three door station wagon became available, badged as the Morris 1100 Traveller or the Austin 1100 Countryman. Domestic market customers looking for a two door saloon would have to await the arrival in 1967 of the Mark II version, although the two door 1100 saloon had by now been introduced to certain oversea markets, including the USA where a 2-door MG 1100 was offered.

of the transversely mounted “normal” manual gear box had been engineered.

At the end of May 1967, BMC announced the fitting of a larger 1275 cc engine to the MG, Riley Kestrel, Vanden Plas and Wolseley variants. The new car combined the 1275 cc engine block already familiar to drivers of newer Mini Cooper and Austin-Healey Sprite models with the 1100 transmission, its gear ratios remaining unchanged for the larger engine, but the final-drive being significantly more highly geared.

The Mark II versions of the Austin and Morris models were announced, with the larger engine making it into these two makes’ UK market ranges in October 1967 (as the Austin 1300 andMorris 1300). An 1100 version of the Mark II continued

alongside the larger engined models.

Unusually for cars at this end of the market, domestic market waiting lists of several months accumulated for the 1300 engined cars during the closing months of 1967 and well into 1968. The manufacturers explained that following the devaluation of the British Pound in the Fall / Autumn of 1967 they were working flat out to satisfy export market demand, but impatient British would-be customers could be reassured that export sales of the 1300s were “going very well”. MG, Wolseley, Riley and Vanden Plas variants with the 1300 engines were already available on the home market in very limited quantities, and Austin and Morris versions would begin to be “available here in small quantities in March [1968].

On the outside, a slightly wider front grille, extending a little beneath the headlights, and with a fussier detailing, differentiated Austin / Morris Mark IIs from their Mark I predecessors, along with a slightly smoother tail light fitting which also found its way onto the FX4 London taxi of the time. Austin and Morris grilles were now identical. The 1100 had been introduced with synchromesh on the top three ratios: all synchromesh manual gearboxes were introduced with the 1275 cc models at the end of 1967 and found their way into 1098 cc cars a few months later.

Mark II versions of the MG, Riley, Vanden Plas and Wolseley were introduced in October 1968, at which time Riley abandoned the Kestrel name. The Riley 1300 Mark II was cancelled in July 1969, and was the last Riley.

At the London Motor Show in October 1969 the manufacturers introduced the Austin / Morris 1300 GT, featuring the same 1275 cc twin carburetter engine as that installed

in the MG 1300, but with a black full width grill, a black vinyl roof and a thick black stripe down the side. This was BMC’s answer to the Ford Escort GT and its Vauxhall counterpart. Ride height on the Austin / Morris 1300 GT was fractionally lowered through the reduction of the Hydrolastic fluid pressure from 225 to 205 psi.

During 1970, despite being fundamentally little changed since the introduction of the Morris 1100 in 1962, the Austin/Morris 1100/1300 retained its position as Britain’s top selling car, with 132,965 vehicles registered as against 123,025 for the Ford Cortina, in that year entering its third incarnation. By the time the two millionth ADO16 was produced, at the end of June 1971, the Morris badged version of the car had been withdrawn in order to create space in the range and in the showrooms for the Morris Marina. 1970 turned out to be the 1100/1300’s last year at the top of the UK charts.

The Mark III models were introduced in September 1971. At the launch of the Morris 1100 in 1962 the manufacturer stated that they intended for the ADO16 models to remain in production for at least ten years[10], which despite BMC’s vicissitudes through the 1960s turned out to be reasonably prescient. The range was gradually reduced, with the MG 1300 dropped in 1971 and the Wolseley 1300 in 1973. The final British ADO16, a Vanden Plas Princess 1300, left the factory on 19 June 1974. The ADO16 was replaced by the Austin Allegro and its Vanden Plas 1500 counterpart. By this time, its original rival, the Ford Cortina, had already grown larger, putting ADO16 into the small, rather than medium-sized class.

ADO16 production overlapped for more than a year with the Allegro.