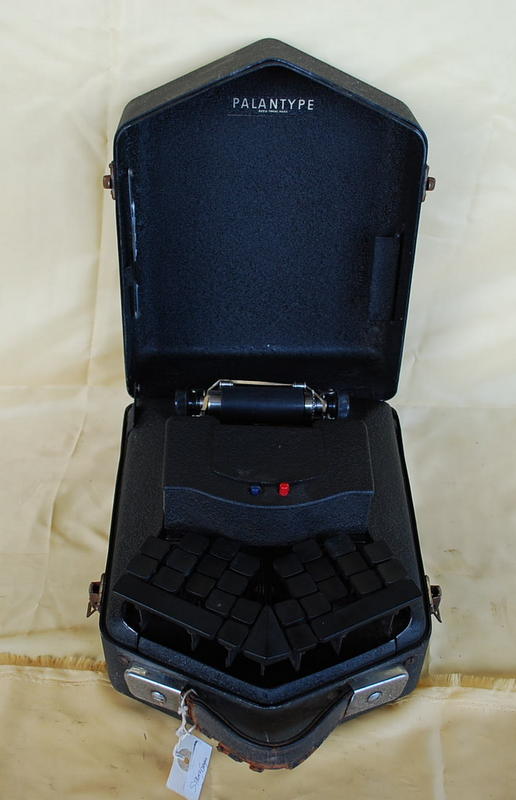 A stenotype, stenotype machine, shorthand machine or steno writer is a specialized chorded keyboard or typewriter used by stenographers for shorthanduse. In order to pass the United States Registered Professional Reporter test, a trained court reporter or closed captioner must write speeds of approximately 180, 200, and 225 words per minute (wpm) at very high accuracy in the categories of literary, jury charge, and testimony, respectively.[1] Some stenographers can reach 300 words per minute. The Web site of the California Official Court Reporters Association gives the official record for American English as 375 wpm.[2]

The stenotype keyboard has far fewer keys than a conventional alphanumeric keyboard. Multiple keys are pressed simultaneously (known as “chording” or “stroking”) to spell out whole syllables, words, and phrases with a single hand motion. This system makes real-time transcription practical for court reporting and liveclosed captioning. Because the keyboard does not contain all the letters of the English alphabet, letter combinations are substituted for the missing letters. There are several schools of thought on how to record various sounds, such as the StenEd, Phoenix, and Magnum Steno theories.

The first shorthand machine (the word “stenotype” was not used for another 80 years or more) punched a paper strip and was built in 1830 by Karl Drais, a German inventor.[citation needed] The first machine was made in 1863 by the Italian Antonio Zucco and was in actual use since 1880 in the Italian Senate. An American shorthand machine was patented in 1879 by Miles M. Bartholomew. A French version was created by Marc Grandjean in 1909. The direct ancestor of today’s stenotype was created by Ward Stone Ireland about 1913, and the word “stenotype” was applied to his machine and its descendants sometime thereafter.

Most modern stenotype keyboards have more in common with computers than they do with typewriters or QWERTY computer keyboards. Most contain microprocessors, and many allow sensitivity adjustments for each individual key. They translate stenotype to English internally using user-specific dictionaries, and most have small display screens. They typically store a full day’s work in non-volatile memory of some type, such as an SD Card. These factors influence the price, along with economies of scale, as there are only a few thousand stenotype keyboards sold each year. As of October 2013, student models, such as a Wave writer, sell for about US$1,500 and top-end models sell for approximately US$5,000. Machines that are 10 to 15 years old still resell for upwards of $350.

The Open Steno Project[3][4] has written free open-source software, such as Plover, and has developed cheap open-source hardware for stenography.

Stenotype keys normally are made of a hard, high-luster acrylic material with no markings. The keyboard layout of the American stenotype machine is shown at the right.

In “home position,” the fingers of the left hand rest along the gap between the two main rows of keys to the left of the asterisk (little finger on the “S” to forefinger on the “H” and “R”). These fingers are used to generate initial consonants. The fingers of the right hand lie in the corresponding position to the right of the asterisk (forefinger on “FR” to little finger on “TS”), and are used for final consonants. The thumbs produce the vowels.

The system is roughly phonetic; for example the word “cat” would be written by a single stroke expressing the initial K, the vowel A, and the final T.

To enter a number, a user presses the number bar at the top of the keyboard at the same time as the other keys, much like the Shift key on a QWERTY-based keyboard. The illustration shows which lettered keys correspond to which digits. Numbers can be chorded just as letters can. They read from left to right across the keyboard. It’s possible to write 137 in one stroke by pressing the number bar along with SP-P, but it takes three separate strokes to write 731. Many court reporters and stenocaptioners write out numbers phonetically instead of using the number bar.

There are various ways to combine letters to make different sounds; different court reporters use different theories in their work. Historically, reporters often created “briefs” (abbreviations) on-the-fly, and sometimes mixed theories, which could make it difficult for one reporter to read another reporter’s notes; but current versions of theories are primarily designed for computerized translation using a standardized dictionary provided by the company that promulgates the theory, which forces reporters to stick with one theory and use only the specific combinations in that company’s dictionary. However, it is not uncommon for students and reporters to add a significant number of entries to a stock dictionary (usually when creating briefs of their own).

Some court reporters use scopists to translate and edit their work. A scopist is a person who is trained in the phonetic writing system, English punctuation, and usually in legal formatting. They are especially helpful when a court reporter is working so much that one does not have time to edit one’s own work. Both scopists and proofreaders work closely with the court reporter to ensure an accurate transcript. The widespread use of realtime translation of the strokes has increased the demand for scopists to work simultaneously with the court reporter. With transcripts produced on computer-aided transcription (CAT) software, a scopist no longer needs to have any knowledge of shorthand theories because the software converts shorthand to text in real time, via a dictionary. However, it may still be helpful in some situations while scoping, as misstroked words may not translate and would appear in steno. Depending on availability of scopists and proofreaders, court reporters may use a scopist only to clean up a rough draft of their transcript, then proofread and certify the transcript themselves; or they may use neither, and produce a final transcript by themselves, though this is a very time-consuming practice.

In this application shorthand typing machines have been used, because only they can keep pace with speech (Seibel, 1964). Two possible machines are currently available for English Transcriptions; the Palantype (a British device) and the Stenograph (an American device). They are both based on the same fundamental principles, but differ mechanically and in the typing conventions they use. These differences suggest that one machine may be superior to the other as an input device for an aid for the deaf. This paper compares the two shorthand systems with a view to their potential use in a system providing a simultaneous transcript of speech for the deaf.