The Singer you see above, won the 1st prize of best design during the Sipak rally in 2003 or 4. It is exceptionally pretty even from behind! 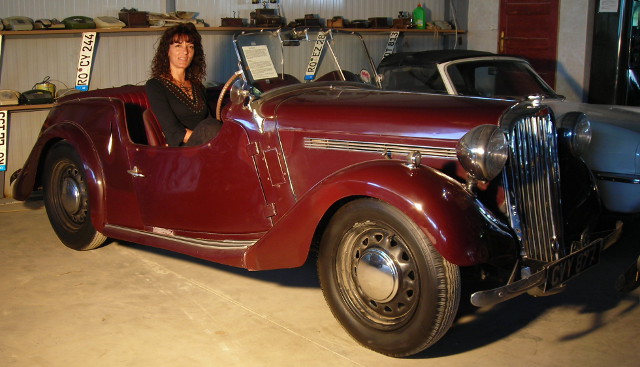 The Singer Roadster was launched by the Singer Motor Company in 1939 as an open version of the Bantam saloon. Production was suspended for the duration of World War II following which production of the car was re-started in virtually unchanged form

The original Roadster was an occasional four seat, two door tourer and had theoverhead camshaft, 1074 cc I4 engine used in the Bantam range but tuned slightly to give 36 bhp (27 kW) by fitting a better manifold and downdraught SU carburettor. Performance was handicapped by the use of a three speed gearbox and top speed was in the order of 65 mph (105 km/h).

The body was built in the traditional method of aluminium panels fixed to a wooden framework. The suspension used leaf springs and was non independent with rigid axles front and rear. The brakes were mechanically operated.