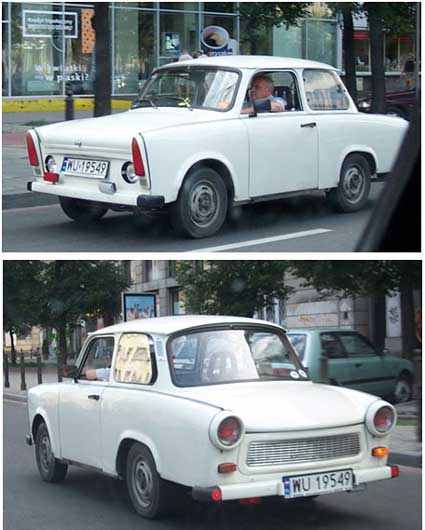 Certainly not the worst car of all time. Made in East Germany and extremely collectible in West Germany. If I am not mistaken, the use of it, was forbidden on the Autobahns of West Germany, because it was slow and quite smoky, as it had a two stroke engine.

It is made of compressed paper that’s non hydrofile, and it does not seem to deteriorate as time goes by. It would be really funny, if after 1000 years, all the rest of the iron and fibre-glass cars have perished, and only these plastified compressed parer cars have remained intact! I had to use this phrase of positive thinking,

The museum owns 3 of them, and loads of spare parts !!!

The Trabant is an automobile produced by former East German auto maker VEB Sachsenring Automobilwerke Zwickau in Zwickau, Sachsen. It was the most common vehicle in East Germany, and was also exported to countries both inside and outside the communist bloc. The main selling points were that it had room for four adults and luggage, and was compact, light and durable. Despite its mediocre performance and smoky two-stroke engine, the car has come to be regarded with derisive affection as a symbol of the failed aspects of former East Germany and of the fall of communism (in former West Germany, as many East Germans streamed into West Berlin and West Germany in their Trabants after the opening of the Berlin Wall in 1989). For advocates of capitalism it is often cited as an example of the disadvantages of centralized planning as even refueling the car required lifting the hood, filling the tank with gasoline (only 6.5 gallons), then adding two-stroke oil and shaking it back and forth to mix. It was in production without any significant change for nearly 30 years with over 3,000,000 cars made.